Stupidity is on the rise.

This piece of 'social engineering' / outrage / racism ----^
Make's me want to scream at the Stupidity of social Media user's, and the attempt at the [sub] Journalistic skill of RACE-BAITING it's reader's.
Purely Shameful, that in America  White people can only wear, 'White-people' clothes. This was the author's conclusion to her " FAKE-News"  wasn't it?   You have to read it for yourself.  I read several different sources, some even more extremest than the linked headline.

Worse still is a company, Forever 21 just got 'BAITED' by the internet trolls on social media,  and just outraged 80% of their real customer's, who used to respect the brand.  Bowing to the stupid concept's of racism on a social media platform,  because it is Black social media OUTRAGE they FEAR the most ; more than bankruptcy.  This is a disaster, for every retailer in America, because, now nothing is safe to advertise, because it might hurt someone's "FEELINGS" and they will 'tweet' about it, and drive them out of business, or at least hurt them financially, and drive up the cost's of the product for everyone.
Report's of "Viral- OUTRAGE", are everywhere in main-stream media, and it disgust's me.
People have become addicted to being outraged, for fame, name, and money from a Go Fund Me, pity fund.  Everyone will eventually pay the price, in the loss of personal freedoms, and choice.

That anyone 'White' would dare wear the name of a fictitious country in Africa, on a sweater, shouldn't even be an issue to anyone.  The moment the phrase," Cultural Appropriation, " began being used as a measure for Racism,  NOBODY is Safe.
The movie itself was written by a white man, and is a work of fiction.   How can there possibly be a "cultural misappropriation", in selling a sweater based on a movie marketed to ALL races and cultures?

I wonder how you would feel if Social media told YOU what is acceptable to wear according to your RACE?
This is the NEW American. Politically Correct, way to behave if your White. (According to the liberal socialist's in mainstream culture,social media and politics.)

I'm screwed,   I look like a ghetto hooker, most warm day's and I'm White Too.   YIKES !!!  What is a Bimbo to DO?
Remain Naked all day?
I'm not even sure if there is a 'White-people's culture, to appropriate'.

21.12.2018 11:57:01
steph98
HeavenLeigh, it's very interesting to me how the black community openly says that there is no such thing as reverse racism. I feel like everyone is being manipulated in such a clever way by the trashy media. They clearly want a race war to happen. When you go out into society, you see black people talking to white people, latinos talking to indians. I am from Europe and I see Chinese people everyday in restaurants, in my college. There is no such thing as active racism anymore. We notice that we're different and we respect our differences. It's as easy as that. Europe is very much open to diversity, don't know about Amerikkka.

21.12.2018 18:33:45
HeavenLeighBimbo
I live in a rural area in America, and there is no open racism.  In fact the Latino community, look at me as some sort of Sex Goddess, because of my looks.  Black people Love me too, especially the men.  I have been with black men when pulled over by the police,  and we were treated as I would expect to be treated in the situation.  The media is using 'Tweets' by emotionally unstable people, as credible sources for creating 'The News' to report on.  People screaming on the street's about poverty, would be more honest to report.  That is real and it is ruining peoples live's.  Racism, is just an emotion.   Most educated people don't see color anymore, unless a person of color start's screaming about it for no reason at all, or uses it as an excuse for committing a crime.  Stupidity, is noticed and hated by everyone.  Just nobody, dares say it to someone screaming about racism.
[because that would be racist]   So you just have to listen to how much they hate 'White-Privilege', and judge you instantly by the color of your skin and the car you drive and the clothes you wear.
It's very odd how hating white people has become acceptable by 16% of America, politically correct and taught in American collages. I'm actually afraid for my grandchildren's future, in America.

21.12.2018 18:44:19
steph98
Unsettling. I do however think that the black community should flaunt their heritage and their historical figures. I think it has to do with racial identity and I see it as something natural and good. Black kids deserve to know their roots. But yeah, the thing about white privilege has a grain of truth within it but that little grain has been blown out of proportions, into some sort of monstrosity.

21.12.2018 19:58:02
HeavenLeighBimbo
The following is a photo, of a checklist issued to collage students by  Professor Dae Elliott at San Diego State University.

Take his test, to see if your a racist or not.    Warning, it is very offensive, and racist.  However people should see, what is being taught in Liberal Universities in America.  I'll post a few link's to sources at the bottom. 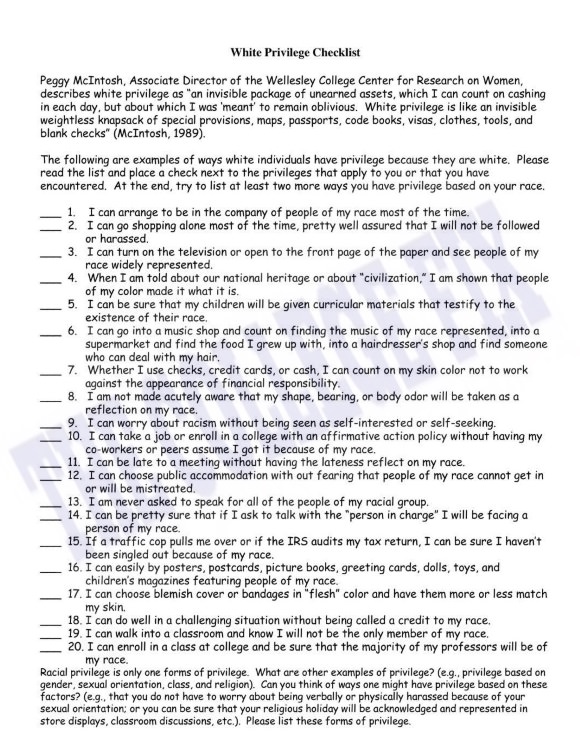 
At the end of the quiz, students were also made aware of other forms of privilege, such as “gender, sexual orientation, class, and religion,” as well as asked to define any more types they can think of.

To earn the extra credit, students were told to also answer a series of questions given to them by the professor. They are: “Were you surprised by your score, or did it confirm what you already knew? Why is privilege normally invisible and what does it feel like to make it visible? Do you think this exercise is different for white students than for students of color? For black students than for Asian, Indian, Latino/a students, or other students of color?”